Another big blow was dealt to the Jamaican GLBTQ community this time in Montego Bay western Jamaica as a controversial police raid involving more than 20 officers some with badge numbers covered happened on Sunday morning of February 20th around 2am at a popular lgbt entertainment spot, this coming on the heels of another mainstream exotic club in Kingston being raided by cops where an exotic dancer was raped by five officers of the law who are sworn to protect and serve. They have since been removed from front line duty while investigations proceed.  According to well placed sources the police raided the premises inflicting blows to patrons consisting of drag queens, lesbians, other patrons, displaced and some homeless lgbt persons who are sheltered at the facility and are a part of a private emergency crisis intervention program funded out-of-pocket by the owner/manager of the club. The more than twenty or so mostly males had to beat a hasty retreat while an event was in session. The cops reportedly ransacked sections of the main club, offices and displaced several electrical items including a flat screen television on the main bar area, destroying furniture and other items in the process. The bar was said to have been raided as well where some stock was consumed. 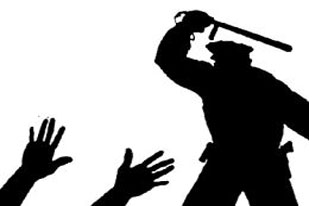 The doors were forcibly removed and kicked off, according to a victim present there were more than 20 officers who arrived in three open back police pickups and a truck all shouting anti homosexual rhetoric and asked for the owner/manager by the alias before unleashing the horror for more than an hour then leaving the premises and attendees in disarray.

At the time of this post no badge numbers or vehicle numbers were available to identify the police personnel.

Several persons had to seek medical attention following the attack and up to the preparation of this post the owner/manager who was not present at the time of the assault was held from Sunday morning at the police station where he went to inquire what had happened, he is to go to court today to apply for bail on charges yet to be made public, apparently there are outstanding charges of other infractions before that were used to justify holding him overnight. The club which opened it’s doors only in the latter part of 2010 was to serve western Jamaica as persons there felt they had to journey too far westwards to central Jamaica and Kingston to get to parties was home to very good events so far and female impersonation shows. According to my sources many of the displaced persons who were beaten and gun butted in some instances were forced into the path of members of the public who were nearby at an event on a parallel road, men reportedly joined in the assault alongside the cops, several of them sustained blows and one popular party person’s face was severely bashed. Fortunately there were some amongst the public who did not support the assault in this latest homophobic incident which has come as a shock to everyone even to the area police as they were aware of the spot they made frequent patrols and had an agreement of sorts with the owner/manager to operate within the confines of the law specifically closing time of 2am or 4am where an extension was sought as the club is not near any residences to breach the Noise Abatement Act, it is surmised the cops came from elsewhere.

Several of the guys tried to run to the nearby hotel but were refused by the management the police arrived after following them, others hid where they could, others were flogged or beating mercilessly with batons. A security guard also alerted the cops to where some of the guys where hiding while the cops handed over several cross dressed persons to members of the public who also participated in the assault. A crowd had gathered who demanded the cops hand over those who they had in their possession at another location most of whom were young scared MSMs who never experienced this harrowing ordeal. The more experienced persons and divas knew what to do and did try to defend themselves by either verbally out maneuver the approaching bad agents or otherwise literally running and dodging the cops between cars and buildings nearby, the trouble with all of this was many of the patrons though from that section of the island were not familiar with the surroundings hence the running in circles with no proper place to hide themselves. The offending officers were also critical of the area police saying they were upholding slackness and battymen in the community.

Meanwhile persons in the community are up in arms as to the reasons for this latest attack, party/club promoter rivalry is said to be the main cause behind this latest problem with the police. Patrons and other party promoters are hell bent on sticking to this reason, the accused promoter/club manager in question is said to be associated with a female cop whose questionable standing is of major concern to many, a party planned in early February on the eastern part of the island also mysteriously found itself shut down even before proceedings could have commenced while another new venue in Kingston also has had problems with unexpected visits by police who use terms such as “the boss sen wi fi lock it dung” (the boss sent us to close the events down). This latest assault is really a shocker as while an event which was not heavily supported was in progress at the rival promoter’s venue it took place leaving many speculating.  Patrons have vowed not to ever support this particular promoter’s events anymore in direct protest to the alleged set up. Reports also suggest the cop herself has said she is going to close down the other rival venues while patrons have vowed they would rather take the chance and go to mainstream straight parties instead. There was some agreement between the party promoters earlier in the year following a meeting in which the accused promoter/club manager was present that permanent clubs would take turns hosting events as a form of round robin to accord fairness but this seems to have been broken down leading to the present impasse. The accused promoter/club manager has complained bitterly that they had initially closed their facility located in the north central part of the island to facilitate the Kingston club to open its doors as many patrons do not wish to trek all the way to the former with high gas prices and gate admissions as major deterrents there was even a name and image change in order to attract business by the out-of-town club’s team but it hasn’t seem to bear the desired results, they also complain that the other promoters are unfair and over promote on dates in strong competition leaving their club eventless for long periods. Other long time and new individual lgbt promoters are also up in arms as well, many who were once friends with the accused promoter are taking a different position when it comes down to business. Sad that this internal rivalry maybe the cause of this awful incident and to think lives could have been lost bearing in mind our GLBTQ community does not have a good relationship with the police force despite the noted improvements over the past two or so years. Allegations of threats and counter threats between the parties is also making an untenable situation even more stressing for some. The Kingston promoter allegedly in one instance has been told by the offending officer to dot all his “Is” and cross all his “Ts” when putting event together as he maybe targeted for future shutdowns, probably permanent if he should slip all together.

The cop incidentally is not a member of the lgbt community.

I do believe there is no need for all this violent rivalry in the marketplace in as far as GLBTQ entertainment is concerned has diversified and grown so fast that all promoters and parties involved old and new can survive despite competing for the more available pink dollar. Gone are the days due to fear and other reasons there were only one or two major party promoters or events, the younger GLBTQ cohort is looking for choices and new experiences.

The fallout also for the displaced persons is also evident as many of them had to hit the streets last night until some short-term solution is found. For a member of the community to side with rogue cop(s) to inflict this latest round on the community is just awful.

Let us hope and pray this issue is resolved quickly, the police in the area have asked that reports be filed and photos taken of the damage done to the property and persons if possible as evidence to expedite the investigations.

My concerns go out to my friends in Montego Bay, sorry I couldn’t be there to assist but I am watching this one carefully with a large magnifying glass. I hope JFLAG despite their low performance these days are on to it as well.

Updates to come where available and thanks to my sources for alerting me to this early.