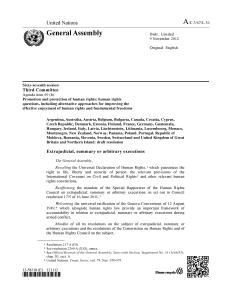 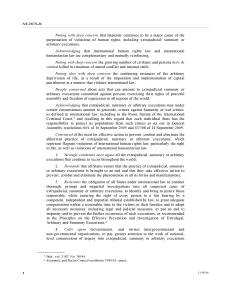 Here is an excerpt of what our government refused to support: (CLICK IMAGE TO DOWNLOAD THE PDF)

The General Assembly, Recalling the Universal Declaration of Human Rights,

1 which guarantees the right to life, liberty and security of person, the relevant provisions of the International Covenant on Civil and Political Rights

2 and other relevant human rights conventions, Reaffirming the mandate of the Special Rapporteur of the Human Rights Council on extrajudicial, summary or arbitrary executions, as set out in Council resolution 17/5 of 16 June 2011,

3 Welcoming the universal ratification of the Geneva Conventions of 12 August  1949,

4 which alongside human rights law provide an important framework of accountability in relation to extrajudicial, summary or arbitrary executions during armed conflict, Mindful of all its resolutions on the subject of extrajudicial, summary or arbitrary executions and the resolutions of the Commission on Human Rights and of the Human Rights Council on the subject,

The recent surprise discovery by some human rights groups and activists that the Jamaica government via its foreign affairs ministry voted yes to change a specific resolution that offered protection from discrimination and state sanctioned killings based on said sexual orientation is now gaining some traction and has evoked mostly negative responses depending on how one looks at how the discussions have been framed. This is the same country that led the struggle along with others under the leadership of Prime Minister Hugh Shearer Internationally on Human Rights and we have subsequently ratified treatises, voted positively on other matters including very public international affairs.

The widely held believe of the “promise” for some persons or the proposal made by Prime Minister Simpson Miller to review the buggery law with a conscience vote the mechanism however has not been outlines fully, this garnered international recognition from other leaders and which ultimately led to the Time Magazine awarding her one of the most 100 influential persons in the world award thus making us look progressive but now?

One of her ministers has a set of questions to answer such as why was the vote done so as to avoid offering specific protection from discrimination due to sexual orientation? that Ministry has been mum since the news broke and the Ministry’s representatives declined a radio interview on the matter. They need to be reminded that they are servants of the people, this reminds me so much of the gymnastics during the Sexual Offences Bill debate and the Charter of Rights over its ten plus year period it stayed on the parliament agenda with the subsequent repeated interference by religious right groups such as the Lawyers’ Christian Fellowship who used legal manoeuvrings to move words such as “sex” suggesting it would have opened doors for homosexual rights agenda and gay marriage agitation by the gay lobby. We see them now acting up aided and abetted by foreign zealots and well funded too spending thousands on ads and other activity when the poor need help.

reminder of the PNP when A. J Nicholson was the opposition spokesman on justice: Opposition sides with Govt on No to same sex marriage

The bigger picture is the protection of the least amongst us and ALL persons should have protection under the state, the Jamaica government denied offering protection to such a group being us homosexuals all because the language is specific to the type of discrimination. Isn’t it A. J. Nicholson the Minister now of Foreign Affairs, the same A. J. who was very vocal in the aforementioned Sexual Offences Bill/Charter of Rights slammed the suggested and attempted repeal of buggery, parliamentary submission by JFLAG everytime there was a hint in the language that seems in the eyes of some to offer a perceived loophole to other “rights” that we do not deserve they act most times covertly to trash the clauses or sentences revealing such.

We have a culture we know of extreme homophobia and homo-negativity we also have a culture that would extract a significant political rice were any government were to be seen voting to protect supposed “deviants”  it is either we agree as a nation via our governments that human rights are inalienable to all persons of the citizenry including those who visit on our shores or we say no are not going to extend human rights because of some political issue. To be denied the protection simply because of behaviour patterns while ignoring consent and privacy is just plain wrong, a wrong that has been carried on for generations but the emotions run high and cloud the level headed discourse that is required on this issue for us to get to a pluralistic society. We are the same society that has no problem suggesting taking matters to the international commission on human rights for example or the Privy Council or the suggested Caribbean Court of Justice that of the face of it is about to be foisted on us whether we like it or not. Strange when the death penalty was prescribed by local courts and upheld via the PC our government cries fowl and hold prisoners for over five years on death row all because it wants to look good internationally then the PC rules that those accused cannot be hanged who are held over the five year period (after exhausting the necessary appeals)  the complain that we are being dictated to when it was OUR OWN Jamaican law that are used by the PC to adjudicate matters presented to it by Jamaicans litigants who use that avenue.

We cannot have it both ways, either we are for rights or against, when the political pundits sought the job of leadership is was to do just that, LEAD, it’s not going to be easy and there are some unpopular decisions that maybe taken for the greater good of society, leaders must rise to the occasion  that is their mettle and when it is tested it must be found to have been vigilant, strong and forthright in defending human rights.

Beyond the Headlines host Dionne Jackson Miller had Arlene Harrison Henry of The Independent Jamaica Council for Human Rights on Human Rights Day discussing the the removal of language in the form of sexual orientation on the Summary Executions UN Resolution – On November 21, 2012, Jamaica voted against resolution A/C.3/67/L.36 at the United Nations condemning extra-judicial, summary or arbitrary executions which urges States “to investigate promptly and thoroughly all killings, including… all killings committed for any discriminatory reason, including sexual orientation.” Additionally, recent incidents of vigilante attacks on perceived gay persons continue to undermine the achievements and call into question the national commitment to equality for persons of diverse sexual orientation listen:

What we have here now is that we have failed that test for some of the vulnerable amongst us, myself included as a gay man and others in the society where we have copped out in the matter of sexual orientation. The government  is weak on the things that matter and the things that will last defining how the least amongst us will live onwards with protection specifically set out. Instead some persons want the language to say “any other reasons or groups therein”

Here are some more reactions from the talk show circuit giving us some insight as to how the public is seeing this and believe me the views are so skewed out there.:

Much to ponder on as a nation