Here are some more resources for your perusal from the above captioned site on bisexuality, help to recognise our Bi individuals locally.

also see EXCLUSIVELY ON THIS BLOG:

The Klein Sexual Orientation Grid (or KSOG) is a system for describing a person’s sexual proclivities in a way more detailed and informative than previous methods. It was introduced by Dr. Fritz Klein (1932-2006) in his book The Bisexual Option.

The Klein Sexual Orientation Grid is shown in the table below. For each person, it sets out the seven component variables of sexual orientation, listed as A through G down the left side. The three columns indicate three different points at which sexual orientation is assessed: the person’s past, their present, and their ideal. The person then receives a rating from 1 to 7 for each of the 21 resulting combinations, one rating for each empty box in the chart below. The meanings of the ratings are indicated just below the grid itself.

For variables A to E:

For variables F and G:

Past: Your life up to 12 months ago.
Present: The most recent 12 months
Ideal: What do you think you would eventually like?

Sexual Attraction: To whom are you sexually attracted?

Sexual Behavior: With whom have you actually had sex?

Social Preference: Social preference is closely allied with but often different from emotional preference. With members of which sex do you socialize?

Lifestyle Preference: What is the sexual identity of the people with whom you socialize?

Sexual Identity: How do you think of yourself?

Political Identity: Some people describe their relationship to the rest of society differently than their personal sexual identity. For instance, a woman may have a heterosexualsexual identity, but a lesbian political identity. How do you think of yourself politically?

Note that the Klein Grid takes into consideration the fact that many people change their orientation over time. Where a person is today is not necessarily where she or he was in the past — or, for that matter, where he or she will be or would like to be in the future. The concept of sexual orientation as an ongoing dynamic process is necessary if we are to understand a person’s orientation properly in its entirety. A more detailed explanation is found in Chapter 2 of Dr. Klein’s book The Bisexual Option.

Please note that although it is entirely possible for an individual to utilize the Klein Grid for the purposes of better determining self identification through a process of self assessment, if you are in the process of coming out as bisexual, the best option is to seek the guidance of a professional therapist who understands bisexuality. 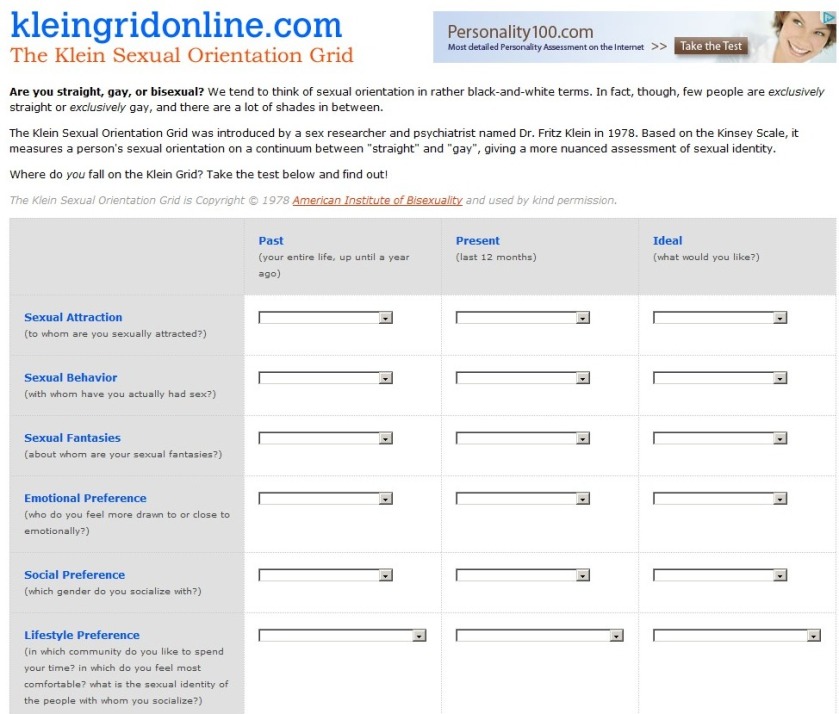 The Bisexual Option was originally published in 1978 by Haworth Press, with a Second Edition published in 1993 by Routledge, and is today published by Taylor And Francis, who also publish the Journal Of Bisexuality. Written by Fritz Klein, The Bisexual Option not only offers an in depth exploration and a detailed overview of bisexuality and an explanation of the bisexual, but it also shatters many commonly held myths about this mostly “unseen” but in reality very prevalent segment of society.

Now in its second edition, this intriguing book gives an overview of bisexuality. The publisher, Taylor And Francis, says that “there is still no book that covers the subject like this one, it is must reading for establishing a contemporary view of bisexuality and those committed to a bisexual lifestyle.”

The book is divided into three “parts”. Part One, entitled, “What Is Bisexuality?” begins with the first chapter entitled “The Threat” by discussing the reality that many homosexuals and heterosexuals view the bisexual as a “threat” and goes on to dicuss the myth of the “non existence” of bisexuals still held by many in society and the sense of “either/or”.

Chapter Two moves on towards a definition of bisexuality, as the various dimensions, facets, and aspects of the bisexual’s definition are given andThe Klein Sexual Orientation Grid is explained in detial. An analysis of cultural and biological factors of sexual orientation is also presented.

Chapter Three offers a discussion and study of bisexual intimacy, beginning with the differences in between sexual and emotional intimacy, and the connection between intimacy and hetero- and homophobia, including a profile of a heterosexual male who is able to be emotionally intimate with men. Chapter Four offers a new look at and an explanation of the of the Oedipus complex and the view that both homosexuals and bisexuals are able to resolve it successfully, accompanied by an example showing how one bisexual male has resolved it.

Part Two, “Bisexuality and Health“, is comprised of the next three chapters, which detail the differences between “The Healthy Bisexual” and “The Troubled Bisexual”. This begins with a definition of neurosis and the various types of troubled bisexuals, as well as the healthy functioning of the bisexual and then offers profiles of four troubled male and female bisexuals and three healthy male and female bisexuals.

The last three chapters form Part Three, “The Bisexual In Society“. Chapter Eight, “Sociological Findings” offers further discussion of the mistrust and misunderstanding of the bisexual by the heterosexual and homosexual communities and Chapter Nine, “The Bisexual In History And The Arts” will lay to rest any thoughts off bisexuality being something “new” as it gives a list of famous bisexuals both past and present including profiles of Alexander the Great, Oscar Wilde, Somerset Maugham, and Colette as well as a review of Greek civilization and the Bloomsbury Group. A list of examples as well as a discussion of three works in which the bisexual “ideal” and “truth” are portrayed is also given.

The tenth and final chapter regarding “The Bisexual Future” is a discussion of nine factors influencing bisexuality: AIDS, sex roles and stereotypes, androgyny, friendship and lovers, family, “gay lib,” the women’s movement and feminism, myths, and dilemmas. The book also offers 2 Appendices, “The Bisexual As Portayed In The Arts”, the results of a Bisexual Survey, and a full Bibliography.